From living in the future issue 3, New Lands

“If our species is to survive the next hundred years, let alone a thousand, it is imperative we voyage out into the blackness of space to colonise new worlds across the cosmos.”
—Professor Stephen Hawking, Live from Space 2014

The rain fell – floated. It was dark, and the drops were fat and round as oranges. Dr. Shelley watched, her mouth agape as they lowered themselves to the surface of the lake, shook like jelly and finally disintegrated into a complex lacework of ripples. She wondered what strange sound the raindrops made as they hit, but all she could hear was her breath and the loud thump of her heart in her suit; few people would live to see such a thing; that one day she’d be one of them amazed her.

Base was downwind of Erebor Mons1, a huge cryovolcano, and so the rain could drift downwards uninterrupted, not whipped around at the crazy speeds customary for the moon. More importantly, the fragile ice roofs of the buildings were not susceptible to nearly as much elemental damage here as they might be elsewhere.

The camp was divided into two main sections: living quarters (underground, carved out from the ice –which provided fine insulation– and sealed by multiple airlocks) and, six miles away, an electrolysis plant which was steadily carrying out its thousand-year labour of converting ice into oxygen, using the hydrogen left over to run the generator. There was one vehicle, and a stretch of boulders had been cleared to provide a crude roadway between the sites.

This was a lonely mission, with no means of return possible. The mission was simply too important for humanity to forgo, and the installation far too complex to be automated. The six engineers would live out the rest of their days on freeze-dried food, occasionally sending back scientific reports to a distant Earth, billions of kilometres across the black gulf of the solar system. Eventually they’d pass away, and the thousands of tiny, self-repairing robots they’d built would indifferently carry on their tireless work.

Her eyes had already adjusted to the soft orange light. They traveled upwards, but the peak of mount Erebor was hidden in the murk. The rain – a thousand yearly phenomenon on Titan– eased off before the eyes of the last person ever to see it.

Impundulu soared above the moon’s curve, observing the sun’s bright reflection as the vast sea of hydrocarbons hove into view. Three glorious years it had sailed through space, joyfully skating around the rims of planets’ gravity wells, calculating, calculating, singing to itself of the wonder of the universe. It appreciated the stunning beauty of the scene, the mathematical bliss of a universe forever slotting into place according to its own inexorable physical laws. Light danced from the hazy throbs of the lowest frequencies to the shimmering gamma rays, vibrating quintillions of times per second.

It began the smooth arc of its descent, quickly down through the now oxygen-rich atmosphere in a perfect curve. Flames formed around its body, rushing back behind it, making it a comet in the sky. Rivers, inlets, estuaries, fjords passed below in fractal perfection. Soon the sea was all it saw, and at exactly three metres above the surface, it detonated its onboard thermonuclear device and the ocean was in flames.

It didn’t see the rest – the flames, burning for centuries, thickening the atmosphere like cream and keeping the heat in, melting the land until it was a new ocean upon which the burning one drifted. The resilient little nanobots latticed themselves into circular rafts, varying in circumference, and switched themselves off forever.

Thousands had turned out – on the far side of the moon, bare thousands was a huge crowd. Rumour was that a representative of the president of Western Earth was among them, though things being as they were, any official political presence would be extremely dangerous.

Flags stood inert along the sides of a mile long avenue, its perfect perspective converging on the rocket in the distance. Music and cheering filled the viewing cars; outside was deathly silent.

The occasion was the launch of Xochipilli, the Prince of Flowers, slight and vulnerable on top of the rocket. The spacecraft carried in its belly thousands of millions of seeds from Earth, carefully selected to form together a coherent and stable ecosystem. It would make its rounds of the upper atmosphere, casting seeds into the wind. They would drift gently down onto the floating islands – the ones which did not fall into the sea, now water – and there they would grow into lush forests, teeming with edible plants, ready to greet the first colonists in a hundred years.

Hands gripped hands and screams fell into silence as the countdown began:

Gentle waves of heat, over many years, warmed the earth. Fertile land opened up further and further north. This was quickly capitalized, and as great cities yielded to the sea, yet greater cities were built in more sensible locations. The unlocking permafrost presented further treasures: first, fantastic bog-people, resplendent with iron-age jewels and coloured hair; then deep-frozen mammoth meat, that was made into expensive burgers for fine New Boston hotel restaurants; finally, a long-forgotten strain of smallpox that all earth’s doctors and scientists had no answer to. It was chaos; the human population on earth was swiftly decimated, its remnants scattered and disorganized.

With no supply ships bringing water from the Earth, the few millions on the Moon worked through their remaining rations and farmed their covered farms dry, and even ate each other, and starved within a few years.

But the first ship to Titan had flown by then. The Grande Hermine had few luxuries – piloted dumbly by computer, it carried the still bodies of Earth, deathly in their suspended animation. The adults and the children were kept in separate areas, due to their different metabolic needs, and when the power failed in the adult’s wing, only the children were left. Three years it flew through space, serene in spite of its huge speed. When it was time, it landed quietly in a forest clearing, unrolled its ramp and opened the vaults of children. After a spell, hungry and crying, they crawled out of the ship and into the new world. 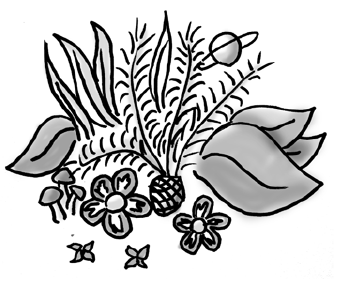 (1)Titan’s mountains are all named for peaks in the works of J.R.R. Tolkien. Mount Erebor is whereunder the dragon Smaug lies in The Hobbit (1936).^